Plenty of blame, but who has the answer? 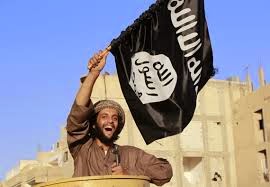 A representative of the Islamic State has warned that the organisation will soon use unmanned drones to attack targets in Baghdad, Kurdistan, Syria, Israel and the United States. Drones for the attacks on the United States would be launched from Mexico.
Perhaps even more worrying: a poll carried out by ICM for the Russian news agency Rossiya Segodnya revealed this week that 16 per cent of French citizens have a positive opinion of the Islamic State. France has an estimated five million Muslims. The same poll found seven per cent of British citizens responded favourably to the Islamic State.

Marc Thiessen, author, columnist and political commentator - named by the Telegraph as one of the 100 most influential conservatives in America - blames President Obama for the rise of the Islamic State.

So proud are the Islamic State’s leaders of their acts of barbarism that they broadcast them for the world to see on Twitter and YouTube. "In one propaganda video, they show hundreds of victims being trucked to an execution site, where they are filmed pleading for their lives before being marched toward open pits and shot one by one. Islamic State militants recently tweeted a photo of a decapitated head with this message: 'This is our ball. It is made of skin #WorldCup.'"

The Islamic State "runs camps where it indoctrinates children to believe that all non-Muslims are sub-human, 'apostates' and 'infidels' who should be exterminated. Vice News recently interviewed children undergoing such indoctrination by the Islamic State. One young boy looks into the camera and says 'In the name of God my name is Daoud and I am 14 years old. I’d like to join the Islamic State and to kill with them, because they fight infidels and apostates.' Another declares: 'We promise you car bombs and explosives. . . I swear to God, we will divide America in two.'

"Some would like to believe that the Islamic State’s offensive in Syria and Iraq is nothing more than 'a quarrel in a faraway country between people of whom we know nothing,' in the words of Neville Chamberlain. In fact, the Islamic State’s leaders have a messianic vision of building a totalitarian Islamic empire encompassing all current and former Muslim lands, stretching from Europe to North Africa, the Middle East and Southeast Asia. They may never see that vision realized, but they can wreak an awful lot of death and destruction trying.

"Their 'caliph,' Abu Bakr al-Baghdadi, recently warned: 'Our last message is to the Americans: Soon we will be in direct confrontation, and the sons of Islam have prepared for such a day. So watch, for we are with you, watching.' They are rapidly accumulating the recruits and resources to follow through on this threat. The Islamic State is actively establishing cells outside Iraq and Syria, including in Europe. And according to scholars at the Rand Corporation, it 'currently brings in more than $1 million a day in revenue and is now the richest terrorist group on the planet. . . A conservative calculation suggests that [the Islamic State] may generate a surplus of $100 million to $200 million this year.'

"The worst part is that all of this could have been prevented. Just a few years ago, the Islamic State (then al-Qaeda in Iraq) was a spent force, defeated both militarily and ideologically thanks to the 2007 US surge, and the Sunni masses who rose up to join the United States in driving them out. Then President Obama’s complete withdrawal of US forces in 2011 took the boot off of the terrorists’ necks. And, as Hillary Clinton recently pointed out, Obama’s 'failure' to act in Syria 'left a big vacuum, which the jihadists have now filled.'

"Now, after standing by and allowing the Islamic State to establish control in an area the size of Belgium, Obama has finally launched limited strikes - but only to prevent the Islamic State from overrunning US diplomatic facilities in northern Iraq (for fear of another Benghazi), massacring Yazidis and controlling the Mosul Dam. Obama insists that 'there’s no American military solution' to the rise of the Islamic State and that 'it’s time to turn the page on more than a decade in which so much of our foreign policy was focused on the wars in Afghanistan and Iraq.'

"Obama may be tired of war, as were Hitler’s enemies. But the Islamic State is not tired of war. It has been explicit about its intentions. The lessons of history are clear. The free world ignores such barbarity at its peril."

So what is to be done with militant Islam?

Posted by Stuart Cunliffe at 15:47