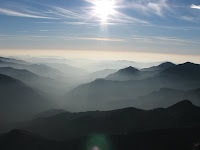 I wrote (here and here) about how I discovered that "Believe on the Lord Jesus Christ, and you will be saved, you and your household" (Acts 16:31), with its "you and your household" bit, was not some sort of spare promise, but a promise that contains a principle that you can see right through the Scriptures.

Ah, you say, but can you show me that it works? Is this something that you have just dreamed up, or can you prove that it works from personal experience?
Let me tell you what God did for me.
When I was converted to Christ, I was still a bachelor, but I had a father, a mother, a sister and a brother. After I accepted Christ, I was the only member of my family who had a personal relationship with Jesus. I spoke to my family about salvation in Christ, but it seemed like they just didn't want to know. At that time, I honestly believed that my family were no more likely and no less likely to come to Christ than anyone else.
Twenty years later, I was still the only member of my family with a personal relationship with Jesus. It was about that time that I realised that "Believe on the Lord Jesus Christ, and you will be saved, you and your household" was a promise I could depend on. I thought about it until I was sure I had understood it, then I claimed my family by faith. I continued to pray for them, but from that time I never once prayed for their salvation. I believed I had the promise.
After I prayed, I wondered how God would do it. Needless to say, He didn't do it the way I expected. Two years later, my sister was gloriously converted to Christ and filled with the Hoiy Spirit in South Africa, where she lived.
As time went on, my father was turned 80 and my mother was pushing 80, but I honestly believed it was impossible for them to die unconverted. When my father was 82, someone led him to Christ. I wasn't there. It wasn't my doing. It was just God being faithful to His promise.
On New Year's Day, 1993, my sister led my mother to Christ. My mother died in October the same year. She was living in a nursing home in Leamington Spa. My sister, who was now living in the UK, and I each got a phone call one morning telling us that if we wished to see my mother we should come quickly. It was mid-afternoon by the time we arrived. She was already gone, but we rejoiced that we believed we knew where she was.
That left my brother. He had his own business. He worked something like 16 hours a day and had time for nothing else. What happened to him was that he developed diabetes; then on top of that he developed kidney stones, to the extent that he was completely unable to work.
As he sat at home, he picked up a book of Bible readings that apparently I had given my parents as a Christmas present years before. It had turned up at his home because he had cleared up my parents' home when first they had moved to a care home. As he looked at it, he saw a verse describing Jesus as God's only begotten Son. Somehow he saw it, and believed.
"Well, I'm a Christian now, so I ought to go to church," he said. He went to a tourist information office near his home and asked for a list of churches in the area. He looked down the list, saw a Pentecostal church, remembered that my wedding had been in a Pentecostal church and he had been impressed by the pastor and the service, went to the church on the list and has been in fellowship there ever since.
(After he accepted Christ, he found his diabetes and his kidney stones were gone. Those were the things God used to bring him to Christ.)
One Friday morning the telephone rang at my home. It was my brother. "I just want to tell you I have found Christ," he said. That was my family complete. I can't tell you what a blessing that was.
Posted by Stuart Cunliffe at 15:52