ISIS barbarism: 'Why is the church silent?' 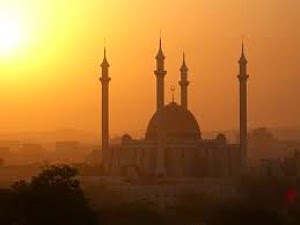 Fifteen Iraqi women in Mosul had their faces severely disfigured by having acid poured on them after the women were caught not wearing a nijab, covering the full face apart from slits for the eyes. Five Iraqi men were executed in Mosul because their wives did not wear the nijab.

In Syria, ISIS fighters took nine villages, capturing 90 Christians. Some 3,000 fled. Judging by past actions, the men will be beheaded and the women used as sex slaves.

It was reported that the women were sobbing, and asking "Why is the West silent? Why is the church not talking about our persecution?"

Posted by Stuart Cunliffe at 16:47 No comments: Links to this post 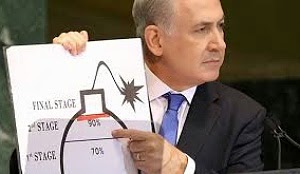 Israel goes to the polls to vote for Israel's parliament, the Knesset, on March 17. One of the big questions is whether Benjamin Netanyahu will be elected for a further term as Prime Minister. Many believe he is God's man for the job; others believe he will be unsuccessful. But all his opponents are not Israelis.

They are known to disagree over one major issue. Iran is going to have nuclear bombs, and it has sworn to destroy Israel. Obama is negotiating with Iran, and is going to leave Iran free to develop nuclear weapons. Obama refuses to meet Netanyahu.

House SpeakerJohn Boehner has invited Netanyahu to speak to the joint houses of Congress in the US on March 3 about Iran's nuclear programme and the threat to international security posed by radical Islam - it is said because Boehner considers these things a threat to US national security. "I am going to the Unites States not because I seek a confrontation with the President, but because I must fulfil my obligation to speak up on a matter that affects the very survival of my country," says Netanyahu.

The Israeli newspaper Ha'aretz reports that a foreign-funded organisation was bankrolling a campaign to defeat Netanyahu's camp in the Israeli elections. An indication of its generous financing is that it has flown a team of five American campaign experts (including Jeremy Bird, the Obama campaign's national field director), who will run the campaign from offices taking up the ground floor of a Tel Aviv office building. Because the campaign doesn't support a specific party - just not Netanyahu's team - foreign funds pouring in are not subject to Israel's campaign finance laws.

Writes repected commentator Caroline Glick: "Obama won't meet Benjamin Netanyahu in Washington when he addresses the joint houses of Congress in March because of Netanyahu's visit's proximity to the Israeli elections. And Obama, of course, believes in protocol and propriety, which is why he won't get involved. No, he's not getting involved at all. He's just sending his 2012 field campaign manager to Israel to start a campaign to defeat Netanyahu. That's all. No interference whatsoever."

Obama has now stopped updating Israel on progress of talks with Iran on Iran's nuclear programme because the Israeli government is using the information "in a manipulative and political way."

Ms Glick explains: "It is hard to understand either Israel's election or Obama's hysterical response to Netanyahu's scheduled speech without recognising that Obama clearly feels threatened by the message he will deliver. Surrounded by sycophantic aides and advisers, and until recently insulated from criticism by a supportive media, while free to ignore Congress due to his veto power, Obama has never had to seriously explain policies regarding Iran, and Islamic terrorists in general. He has never endured a direct challenge to those policies.

"Today Obama believes he is in a to-the-death struggle with Netanyahu. If Netanyahu's speech is a success, Obama's policy will be indefensible. If Obama is able to delegitimise Netanyahu ahead of his arrival and bring about his electoral defeat, then with a compliant Israeli government, he will face no obstacles to his plan to appease Iran and blame Islamic terrorism on the West for the remainder of his tenure in office."

I shall be praying for the result of the Israeli elections. Either way, I shall be grateful for the promises of God, the God of Israel, who neither slumbers nor sleeps. "He that scattered Israel will gather him, and keep him, as a shepherd doth his flock" (Jer 31:10 KJV).

Posted by Stuart Cunliffe at 12:57 No comments: Links to this post

Remembering when the fire fell 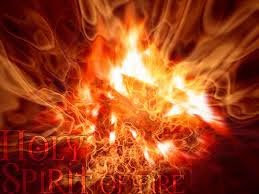 David Voas is a professor of population studies at the University of Essex. He says the future of religion in Britain is to be found in Islam and the black majority churches.

"Muslims already contribute 10 per cent of British births," he says in a blog for the think tank Theos. "Within several decades Muslims will form 10 per cent of the population, even if immigration came to an abrupt halt tomorrow. Even if half are observant, they will form a substantial proportion of the religiously active population."

Meanwhile, traditional churches with a mainly white base are on the decline. "The future of religion among the white British is bleak. There are charismatic (small c) leaders who can inspire and build congregations, but they are few and far between."

I am reminded of the Day of Pentecost, when the Holy Spirit came to the early Christian church. There are two things to notice. First,"they were all with one accord" (Acts 2:1). Unanimous, in agreement, in unity, with one mind and purpose.

On that day, Peter preached spontaneously, and about three thousand people were converted (Acts  2:41).

Are we content to sit back and see a Muslim takeover? Or are we prepared for God to use us?

Posted by Stuart Cunliffe at 11:32 No comments: Links to this post

Intelligence doesn't have anything to do with it 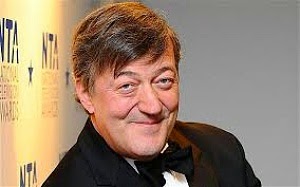 Stephen Fry is an actor, writer and television presenter. His face and fruity voice will be familiar to most.

Fry is a homosexual. He also claims to be an atheist. He has been in the news several times lately: first, because he "married" a young male writer and comedian; secondly because of his remarks in a television programme about the meaning of life. He was asked what he would say when he was confronted by God.

"I'd say bone cancer in children? What's that about? How dare you? How dare you create a world to which there is so much misery that is not our fault. It's not right. It's utterly, utterly evil. . . That's what I would say. . . The God that created this universe, if it was created by God, is quite clearly a maniac. . . utterly selfish."

The arrogance of the man is staggering.

He has been voted the most intelligent man on television, which goes to show that faith in God does not depend on intelligence, or lack of it. Rather, it depends on an attitude of heart. "Unless you are converted and become as little children, you will by no means enter the kingdom of heaven" (Matt 18:3).

Objections to the existence of God by atheists are not intellectual in origin, but moral. People don't believe not because they can't believe, but because they won't believe. Like the men in the parable: "We will not have this man to reign over us" (Luke 9:14). When there's a clash between faith in God and lifestyle, some find it easier to pretend that God doesn't exist.

God made the world perfect, but He gave man free will. Man chose to sin, and through sin came misery, sickness and sorrow. But God didn't leave man in the mess he had made. He came into the world in the form of His Son, lived a perfect life, then suffered unto death that we might be freely forgiven. We didn't ask for it, we didn't deserve it, but He did it anyway. Amazing love. Amazing grace.

One can only hope that Stephen Fry finds repentance. Having found forgiveness ourselves, could we deny another the same experience?

Posted by Stuart Cunliffe at 13:34 No comments: Links to this post

Separated to the gospel 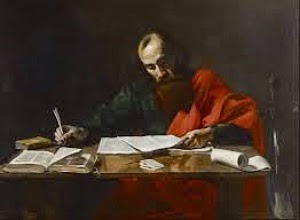 Some years ago, God sent me to work in a steel works. The men in that steel works knew how to give me a hard time.

One morning a young man, his friends around him, was having a go at me. He had an obscene picture he had taken from some pornographic magazine which he held in front of me. "There you are," he said. "What do you think about that, eh?"

Some time later I found myself standing at a bus stop with that same young man. Just the two of us. I didn't apeak to him. If I had been firendly; if I had treated him as a friend, I might perhaps have won him to Christ.

Posted by Stuart Cunliffe at 12:29 No comments: Links to this post 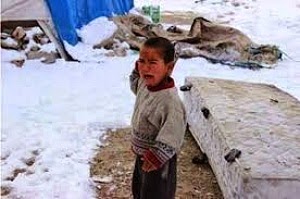 Catholic, Orthodox and Protestant leaders met in Bkarka, Lebanon, and called for international support for Christian refugees in Iraq and Syria. They urged Middle Eastern nations to stop funding terrorists, who have displaced over 90 per cent of the region's believers.

They appealed for material aid and medicines. Christian Aid said refugees, left homeless and penniless, are struggling in snow and bitter winter weather.

According to UNICEF, who are appealing for help to provide winter clothing, medicines and food, seven million children are in grave danger.

Film actress Angelina Jolie said she had never seen anything like the suffering in the refugee camps she visited in Erbil. She demanded additional funding for UN humanitarian efforts and urged countries outside the Middle East to offer sanctuary to the most vulnerable refugees, who had been raped and tortured.

Prayer is good, but material aid is needed too. If you want to give material aid, you can do so through Barnabas Fund, 9 - 10 Priory Row, Coventry CV1 5EX, or Open Doors, PO Box 6, Witney OX29 6BR.

Posted by Stuart Cunliffe at 14:04 No comments: Links to this post 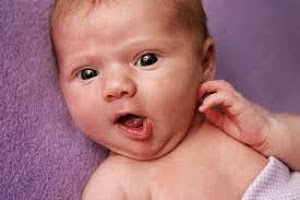 The Government is trying to legalise the creation of genetically modified babies. To prevent mitochondrial disease, it proposes creating modified embryos from a minimum of three parents, which would then be implanted by IVF. The proposal is expected to be voted on in the House of Commons this Tuesday, February 3.

Genetic modifications are expected to be passed on not only to the child, but to all future descendants. There is no way of knowing what the long-term effects might be.

The procedure will necessarily involve the destruction of living human embryos.

The procedure is currently prohibited by international law. We would be the first nation in the world to permit it.

The Department of Health is claiming widespread approval for the proposal, despite its own consultation having shown a majority of the public opposed to the idea.

It is not too late to send an e-mail to your MP, asking him or her to vote against the measure.

Posted by Stuart Cunliffe at 17:28 No comments: Links to this post